Back:  A Short History of the Gramophone

A Short History of the Gramophone

In 1806 the Physicist Thomas Young (1773-1829), expounded his wave theory, a part of which was a means of displaying sound as wavy lines on a drum. Young was more concerned with the nature of sound than a possible recording medium. (see picture)

The first recording machine is at present attributed to the Frenchman Ed Ouardd-Leoan Scott De Martinville (1817-1879) who invented his Phonautograph in 1857. It could transcribe sound onto a blackened glass plate and, later, onto blackened paper on a drum. He had no means of playing it back (in 2008 his sounds were reproduced optically and can be listened to today).

In 1877 Thomas Edison developed a machine that, for the first time in history, recorded speech and played it back (see picture). It was based on machines that recorded Morse code but, instead of dots and dashes, a stylus was attached to a diaphragm and the vibration up and down inscribed on a cylinder covered in tin foil. The idea was patented in 1878. The machine did not become popular as the recording medium was not suitable for extended use and would need to be replaced each time.

Edison with the first Phonograph

In 1886, in Washington DC, Charles Sumner Tainter and Chichester Bell, cousin of A.G. Bell the inventor of the telephone, patented an improved Phonograph called the Graphaphone which looked similar to Edison's Phonograph. Its stylus cut into wax on a cardboard disc.Challenged by the Graphaphone Edison's Company produced, in 1888, the perfected Phonograph. Its cylinders were made entirely of wax and lasted two minutes. Both units were powered by either a sewing machine treadle or electric motor and were only for dictation not music. Edison developed three versions of Phonographs between 1896-1901, the 'Standard' the 'Gem' and the 'Home', these remained in production until 1913. Edison contested, in court, Bell & Tainters wax system. The legal process took two years, at which time the Judge compromised the situation by giving Bell & Tainter their own patent so both companies could make their own machines using each others patents.

In the early 1890's Tainter, Bell, and Edison's companies turned to the more profitable line of music. Arcades for coin-in-the-slot phonographs sprang up and people queued up to hear crude recordings of popular songs, listening through hearing tubes poked into the ears.

In 1888 the German American Emile Berliner (1851-1929) produced a player using flat discs with a stylus vibrating from side to side. Reproducing these flat discs would be easier but they were still made of wax on a zinc base. Berliner re-visited Germany in 1889 to demonstrate his invention to a firm of toy makers, there they produced the first machine called a Gramophone. In 1896 an improved clockwork motor was built by a New Jersey engineer Eldridge R Johnson, and in 1898 a London branch of Berliner's business called the Gramophone Company opened at Covent Garden. The company purchased the trademark 'His Masters Voice' in 1899 and produced the new improved clockwork gramophone, using vulcanite rubber compound and wire needles instead of a stylus which was now only used in the master process.

Shortly afterwards, Fred Gaisberg (who was working for Berliner in 1900) found a better material, Shellac, for making records at a button factory in Newark, New Jersey. Berliner started to use the material to make 78 rpm flat discs, the surface was laced with slate to wear down the needles, instead of the needles wearing down the disc. 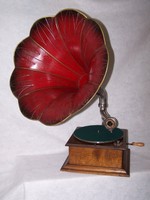 In 1906 the French Pathé Frčres Company developed a new system of flat discs using Edison's Hill Dale (up down) principle. The discs were vulcanized rubber and a jewelled stylus sat in the groove, playing at around 95 rpm, from the inside of the disc outwards. All this was opposite to Berliner's principle of a wire needle vibrating from side to side and playing from the outside inwards at around 78 rpm. Using other manufacturers, particularly German, to make the machines Pathé was to swamp the market with the new medium. An example is the Tournaphone this model includes the 'Morning Glory' type horn introduced in 1904.

By the First World War manufacturing by Pathé had ceased leaving Berliner's machines to forge ahead. Edison's cylinder machines had also disappeared by this time.

Into the Electronic Age

In the 1930's wireless sets were provided with an input for Gramophones using electric pick ups, Radiograms were becoming common place, these used electric motors and the age of mechanical machines was coming to an end. If you had a Gramophone and a Wireless (Radio) you could purchase an electric pick up and replace the sound box turning your unit into an electric player with a wind up motor. Electricity was the new fashion and eventually Gramophones would disappear for those who could afford the new Radiograms, which were very big, floor standing, and heavy, all well made and styled in wooden cabinets.The Gramophone both portable and cabinet, and 78 rpm records were in use through the Second World War until the 1950's.

The 1950's saw the new vinyl long playing records, these records were played on smaller, lighter portables , using lighter pick ups with high electric outputs and a jewelled stylus, feeding simple valve internal amplifier and speakers, none of these systems produced a quality sound. The phrase “High Fidelity (Hi-Fi) was coined, and better sounding systems became available, unlike when the phrase is used today, these systems really did mean a quality sound, and worshippers of this new religion, (which were rare), built their own amplifiers and speakers to achieve perfection, (the author of this article being one). This was happening all through the 1950's and 1960's. Moving magnet pick ups with a force on the record of only one quarter of a gram was achieved and sound close to reality was possible.

Equipment manufacturers would set up systems during the early years in concert halls like the Festival Hall, positioning the speakers behind the orchestra, in order to compare the two sounds. I have heard that on one such occasion both were placed behind a curtain and the audience asked to vote on which was the orchestra, and which was the recorded sound, the result showed that the sound system was preferred. Systems capable of achieving this would have been far too costly for most audiophiles, and during the 1950's almost all systems of such quality were from Britain Europe or the USA. Britain was a leader at the time, the Far East had not yet entered this market.

More Gramphones from the Museum of Technology