Back:  Telegraphy, a Brief History

Jungle Drums, Indian Smoke Signals, the Penny Post, a Ships Telegraph. All these were means of conveying a message from one place to another without actually going there in person. The ships telegraph sends a signal from the bridge to the engine room by mechanical means to instruct the engineers whether to go forward, fast or slow. The Penny Post is hand written and would be conveyed on horseback. The former is quick but limited in information the later is full of information but is very slow. At this time nobody would have considered sending messages using electricity along a wire. Such things were incomprehensible.

Many people have been responsible for the evolution of the 'The Talking Wire' only the key players are mentioned here.

Inventing the Components of Telegraphy

Bozolus and Lesage in 1782 suggested an idea using lines from charged Leyden jars that could send a shock to a recipients fingers, somehow sending a message.

In the late 1780,s Luigi Galvani (1737-1798) made frogs legs jump using an electric charge, static electricity could be generated by a static generator and stored for a short time in 'Leyden' jars, this could be fed along a length of metal and positioned on a dead frog, it was noted that the legs of the animal jumped in response. He called this 'animal electricity'. The idea of sending a signal with electricity and producing a response via a line of metal was evident, the experiment was acclaimed as a breakthrough in medicine, namely the effect of an electric charge on a mortal body 'Electrophysiology' Galvani had also provided a response to the presence of this strange phenomenon called electricity, he called it an electric fluid.

A breakthrough came in 1800 when Alesandro Volta (1745-1827) created electricity using a chemical composition called a 'Volta Cell' which not only produced a charge but also maintained it for a period of time. He was sceptical about Galvani's 'animal electricity'. Volta also created the first battery, effectively a string of cells giving higher voltages. In 1776 he remotely operated (fired) a pistol in Milan from a Leyden jar in Como, the current travelled along a wire suspended on wooden boards.

In 1816 Francis Ronalds (1788-1873) made a machine in his back garden consisting of two clockwork synchronous alphabetic dials at each end of eight miles of wire suspended on frames. The system was charged by a high voltage produced by a friction machine, at both ends a pair of pith balls suspended on threads were held apart by the charge, as the dials revolved the sender observed the character to be sent, at this moment the charge was connected to ground, this made the pith balls come together at both ends.

The receiver then noted the character on his dial as both dials should be in line with each other. After the connection to ground was removed the system was ready for the next character.

Ronald's system was rejected by the Admiralty as 'being unnecessary at the time as Semaphore was quite adequate' and he discarded the idea. Many years later he was knighted for his work on Telegraphy.

In 1820 Hans Christian Oerstead (1777-1851) noticed, by accident, that a compass needle deflected when placed near a wire carrying an electric current, creating more turns in a coil over the needle increased the sensitivity. This device was called a 'Multiplier'. The success of the Multiplier for measuring current led to it being renamed Galvanometer after Galvani's experiments with frogs legs.

The combination of the battery and Galvanometer heralded the start of Telegraphy, the remaining problem of power losses over long distances still remained, the electromechanical relay would solve this. 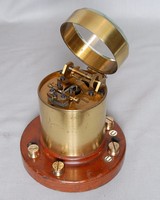 Joseph Henry (1797-1878) invented the electromechanical relay in 1835. A coil of wire wound round a metal core carries a small amount of power that magnetises and pulls in a lever closing a switch which can carry a large amount of power, (sometimes called an amplifier), if placed at regular intervals along the wire it is possible to send a signal around the globe. Using the natural resistance of earth as one path for the signal, only one wire is needed.

Charles Wheatstone(1802-1875) built a Five needle Telegraph in 1837, after William Cooke (1806-1897) had observed a similar experiment in Heidelberg in 1836, from an idea by Baron Pawel Schilling demonstrated around 1832. The device pointed directly to characters in a matrix but only 20 letters were used, omitting the letters C,J,Q,U, and X.

Wheatstone's telegraph was commissioned by the Great Western Railway in 1837, being the first commercial service in the world, operating from Euston to Camden Town. One drawback was the cost of cabling the five needle system which required six wires to operate or five wires and a common earth. Within 3 years this was reduced to 3 wires for a two needle system  because as wires were damaged requiring a coding book, was first installed on the Paddington to West Drayton line and was fully operational by 1839, leading to its use on nearly all lines running out of London. By 1846 the telegraph covered most of the main lines in England as far as Edinburgh.

The success enabled Cooke to form his own company the 'Electric Telegraph Company' using Wheatstones patents freely, he eventually bought out Wheatstone enabling him to develop other scientific ideas, one of which was his successful Printing Telegraph. By 1852 the company had become responsible for establishing over 6000 miles of telegraph lines in Great Britain. The general public at this time were largely excluded from using the service as it was primarily for the railways, if the public wanted to use the system they had to go to the nearest Telegraph office located near a railway station. With the introduction of Morse code telegraphy became more popular and whereas the railways were using specialist methods of communication the systems for general public communication started to use Morse code. Other companies would ensue, after 1851 when telegraph lines were established with the continent, the coding feature of Morse's invention was taken over by the railways and other commercial lines in Britain.

Samuel Morse and the Morse Code

Prior to Cooke and Wheatstones work Samuel Finley Breese Morse (1791-1872) commenced work on his telegraph system in 1832.

Morse was an artist and was commissioned to do a painting in New York. Whilst there he received a letter from his father stating 'your wife is dead', no more information was received. Morse returned home to New Haven, he had been unaware that his wife was sick. He was so moved that he abandoned his painting to develop a means of long distance communication. In 1836, helped by Alfred Vail (1807-1859), he improved his system which used just one wire and went into operation in 1846. The message was received on paper tape using a stylus to indent marks on the paper, known as a Morse register replaced by the morse sounder when it became possible to follow the clicks of the register. Morse developed a code so that the marks could be read as dots and dashes.

Some claim Morse Code should be called Vail Code. Although the original dots and dashes were attributed to Morse, the code eventually used was created by Vail. Morse's code used numbers only, Vial's code was completely different expanding it to alphanumeric characters. Morse also had problems with his system in achieving distances of more than a few hundred yards, a problem which Vail helped solve. Vail also invented the 'morse key' around 1848 along with many other ideas. Vail became disillusioned with Morse receiving all the praise and decided to leave his company, he left Morse with the message 'I have made up my mind to leave the telegraph to take care of itself since it cannot take care of me'.

Even though Morse introduced Morse Code in the early 1840's it was later adopted by Wheatstone with his Single Needle System which now also required only one wire.

Without the great financial help provided to Wheatstone, and with Morse lagging behind by 4 years, the Wheatstone system became the commercial success. This, even though Wheatstone's needle was cumbersome needing the movement of a handle to move the needle left or right. Morse Code replaced the needle movement with dots and dashes (short or long periods or marks).

Many variations of equipment were developed including the ABC Telegraph,Morse Inkers and the Double Plate Sounder and most signficantly for modern communication the Baudot Character Printer using a 5 bit code and requiring 5 wires.

Eventually undersea cables surrounded the world all sending Morse code, characters were converted on a keyboard to a paper tape consisting of two holes side by side, one side a dot the other side a dash, converted back at the other end. As undersea cables were often busy, the tape was queued until its alloted time day or night. Morse's system had became world wide. Wheatstone's system still exists in various forms in signal boxes in the UK, but never became universal.

Morse Code as an international means of communication declined in the 1980's, being officially made oboslete by the French navy in 1997. However it continues in widespread use by Radio Amateurs who value its ability to achieve communication in difficult conditions and with low power. Three letters SOS (Save Our Souls) persist to this day ... --- ... and, in your mobile phone, you may be familiar with SMS ...--... 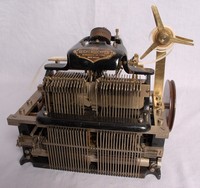 Both Wheatstone Telegraphs and Morse Code required expert operators to intrepret the signals into alpanumeric characters. Machines like the Baudot Character Printer de-skilled the task by allowing characters to be typed and printed, they could be used by low paid operators but they required five wires to operate. Eventually electro-mechanical machines such as the Creed Teleprinter were made which, using a rotor, could take the five bits of information and send them in series along a single wire with series to parallel conversion occuring at the receiving end. The ideal combination of cost and usability had been achieved. Electro-mechanical machines were replaced in the 1970's with computers, the 5 bit Baudot Code grew into 7 bit ASCII code allowing 128 characters to be coded. Today ASCII is replaced by Unicode, a 32 bit code which can encode every characterof every language of the world, but the basic principles of the modern Internet age are still those of Wheatstone and Morse.

More Telegraphy from the Museum of Technology