A Brief History of Wireless (Radio)

Most people would refer to Marconi as the father of this medium but even he required assistance, he did not succeed entirely on his own. Many inventors were responsible for this important means of communication; here in chronological order are some of the names that led to Marconi's success. 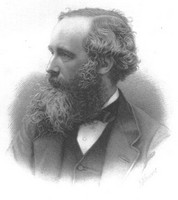 A Scottish mathematician and physicist who worked on the foundations of electromagnetic theory laid by Michael Faraday. In the Millennium poll - a survey of the 100 most prominent physicists - Maxwell was voted the third greatest physicist of all time, behind only Newton and Einstein. On the centenary of Maxwell's birthday Einstein described Maxwell's work as the "the most profound and the most fruitful that physics has experienced since the time of Newton". Einstein kept a photograph of Maxwell on his study wall, alongside pictures of Michael Faraday and Newton.

An experimental physicist with little mathematical training. In 1879 Hughes managed to transmit and receive electromagnetic waves over a distance of several hundred metres using a detector made of a piece of coke resting on a bright steel contact. He observed that a loose contact between metal particles performed as well but tended to 'Coher' after use and needed to be tapped to loosen them before the next signal. He also found that 'sudden electric impulses' work best as electro-magnetic waves. Unfortunately the scientific community refused to accept his work saying it was merely electromagnetic induction and he was wrong in his assumption that he was radiating Maxwell's waves; he ceased working on the project andthe results were not published until 1889. What he had done was later finally acknowledged in 1900. Marconi knew Hughes through Sir William Preece and Oliver Lodge, mentioned later. 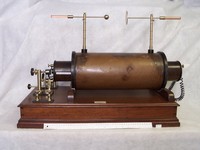 A German physicist who set out in 1887 to prove Maxwell's theories. He did not believe in the mysterious 'Aether' but did believe in the possibility of electromagnetic radiation.

Using an Induction Coil a capacitor and two spheres to discharge the high voltage, he was able to tune his oscillation enough to radiate energy which was received by a loop of wire with a small spark gap, the result was a clear spark across the gap of hundredth's of a millimeter. The gap was made up of a sphere and an adjustable point, the loop was tuned to the same wavelength of the induction coil and capacitor. By this means Hertz confirmed Maxwell's theory about electromagnetic waves. Unfortunately he died a month before his 37th birthday; his name Hertz was adopted as the SI unit for electrical frequency known for many years as a 'Cycle' i.e. one revolution or one oscillation per second.

An inventor and engineer, 'the mad scientist' of his time who was largely rejected by the scientific community but was subsequently acknowledged as brilliant in his field. Born in Croatia and living in New York he is best known for his work on electromagnetism. His work on electrical distribution is still in use today, as are many of his inventions. Tesla demonstrated wireless energy transmission as early as 1891, known as the movement of energy through space and matter, more to do with the transmission of power than radio. In 1915 he filed a lawsuit against Marconi regarding his claims and was unsuccessful. He had grasped that the electromagnetic field was transmitting energy, not settling for just communication he intended to go for much grander ideas, such as powering a house with electricity from a distance with no wires. His contribution to the technological revolution remains staggering. The SI unit of magnetic flux density the 'Tesla' is named after him. In the late 1880's Tesla's involvement with Westinghouse involved him in the "war of currents" with Edison who was convinced that power distribution should use direct not alternating current, history was to prove the latter correct. His work is to prolific to mention here, more reading is advised.

The British physicist and radio pioneer, Lodge continued Hertz's experiments and improved Edouard Branley's Coherer radio wave detector, by adding a 'trembler' which dislodged clumped fillings, thus restoring the devices sensitivity, in fact it was he who coined the word Coherer. In 1888 he showed that radio frequencies could be transmitted along electric wires, as Hertz had proved the same could move through the air. He worked with Alexander Muirhead on the development of wireless telegraphy, selling their patents to Marconi in 1894. In the same year Lodge gave a lecture on Hertz (who had recently died) and transmitted radio signals to demonstrate the potential for communication. This was one year before Marconi, but one year after Tesla did the same thing.

The Coherer , basically a means of rectifying or detecting radio waves, now known as a demodulator Oliver Lodge was an ardent believer in psychic phenomena, writing over 40 books on his knowledge, improved many inventions, and added more of his own, for example Lodge spark plugs.

The Russian Physicist, built his version of a radio receiver in 1894, (based upon the Coherer) and a sender of unknown design, presenting it on May 7th 1895, now celebrated in Russia as 'Radio Day'. In March 1896, he achieved transmission of radio waves between different campus buildings in St. Petersburg. He also successfully demonstrated a 'ship to shore' system over a distance of 6 miles in 1889, and 30 miles in 1899. His receiver used a bell as a sounder and his messages were coded. In 1901 Alexander Popov was appointed as professor at the Electrotechnical Institute, which now bears his name. In 1905 he was elected Director of the Institute.

A German wireless pioneer and doctor in mathematics who studied with Heinrich Hertz. From 1897, as a result of his acquaintance with English administrator Sir William Preece (1834-1917). Slaby participated, with help from George Von Arco, in Marconi's experiments with wireless telegraphy across the English channel. Repeating his experiments in Berlin, on October 7th 1897 he established a 21 kilometer radio link between Schoenberg and Rangsdorff, a world record. The following summer, he established a link between Berlin to Juterbog, a distance of over 60Km. His work was not with Marconi's spark gap transmitters and antennas but with inductively coupled antennas.

Bose was a great inventor and scientist. In 1896 he met Marconi and expressed disinterest in his commercial form of telegraphy and suggested he share his work with others, Bose was never interested in making money from his own ideas. In 1895 Bose gave his first public demonstration of electromagnetic waves, using them to ring a bell remotely and to explode some gunpowder. It is said that Bose was 60 years ahead of his time, and had successfully experimented with wireless ahead of Marconi.

One of the problems with wireless communication at the time was not so much sending the waves, but processing them when they are received. In 1899 he announced a new form of Coherer using Mercury, presenting a paper to the Royal Society London. Bose also used semiconductor junctions to detect radio waves.

Bose was experimenting with microwave communications as far back as 1897 and developed many now common microwave components. His major contribution was work on wavelengths below 10mm. At the National Radio Astronomy Observatory in Tucson, Arizona a new multiple-feed receiver, based on Bose's work and operating at a wavelength of 1.3 mm, has recently been built and installed on the 12 Meter Telescope at Kitt Peak.

It appears that Bose's demonstration of remote wireless signaling has priority over Marconi, as all his major work was up to 1897

Since Marconi heard of Maxwell's theory at the age of 20 he was convinced that telegraphy without wires was a possibility, he studied under Augusto Righi (1850-1920) the Italian physicist, at his laboratory in Bologna.

Marconi would have heard of most of Bose's work and his equipment was to become larger and more complex eventually using tuned coils and couplings devised by Karl Ferdinand Braun (1850-1918). As Marconi's equipment became more efficient it could cover greater distances. Starting with his first notable outdoors success over 6Km on Salisbury Plain in 1897 and across the Bristol Channel that same year, the English Channel was crossed in 1899, and Porthcurno Cornwall to Newfoundland Canada in 1901. All this was achieved using spark gap transmitters of varying sizes and strengths.

Using spark transmitters Marconi was limited to sending Morse Code.  Modulating the wave to send speech was prevented because the energy of the spark was not constant, it could vary and be unpredictable, as each pulse decayed, this also caused much background noise.

Marconi is now considered the father of wireless telegraphy, it is not so much as the others could have done as much before him, it is more that Marconi had a parochial determination and did not deviate from his cause, he seemed convinced that it could be done and succeeded. His achievement should not be confused with wireless telephony, which was still to come.

To solve the modulation problem a new type of wave was needed, that of continuous form. Fessenden, a Canadian inventor, was possibly the first to produce wireless transmissions of voice and music (wireless telephony). In 1900, using a spark transmitter designed to produce 10,000 breaks per second, he transmitted speech over a distance of 1.6Km, the quality was poor and not suitable for commercial use. In 1906 transmissions crossed the Atlantic using his new rotary spark gap. Fessenden knew that sparks were not the answer, building a continuous wave alternator, generating a pure sine wave was required. The Marconi Company took out a lawsuit against him and failed, the judge saying that his ideas were a totally new concept. Fessenden was not good at promoting himself, and he left radio being beset with legal and financial problems, and moved onto other work.

Once the thermionic valve appeared, starting with Ambrose Fleming's diode, converted into the amplifying triode by Lee Deforest, Fessenden's alternator was replaced with thermionic oscillators, producing countless possibilities for the continuous wave, opening up the future for Radio, leaving Fessenden as the father of wireless telephony.

An American dentist first demonstrated wave transmission in 1868, using two kites supporting wires as aerials separated by 14 miles of free space; he appears to have made a galvanometer move at the distant end, a patent was issued in 1872 for the system. One fact that his experiment brought to light was that the transmitting and receiving wires needed to be of the same length, the receiving end had a galvanometer connected to the aerial and ground, and by connecting the distant kite/aerial to ground the needle of the instrument would deflect, which seems to suggest the transmission of electrostatic energy picked up by the first kite in the atmosphere, was passed to the second, it seems that on some days this did not work, confirming the possible electrostatic theory. This started Loomis on a course for wireless telegraphy, attempting to get financial help from the government failed, he was approved a licence for his own company, but some believed he was a fraudster and interest was not forthcoming. He was however the first to obtain a patent for wireless telegraphy.

San Jose California. The first radio broadcaster transmitted daily from 1909 to 1917, licensed as KQW in 1921 and became KCBS in 1949. These transmissions were listened to by amateurs on crystal sets.

More Wireless from the Museum of Technology