Home: Valves:  A Brief history of the Point Contact Transistor

Including STC at Ilminster

Origins in the USA

On June 17th 1948 John Bardeen and Walter H. Brattain filed a patent application for a 'Three Electrode Circuit Element Utilizing Semiconductive Materials'. They were working at the Bell Telephone Laboratories (Bell Labs) in New York with William B. Shockley. US Patent No. 2,524,035 was granted on October 3rd 1950.

Their initial realisation comprised a triangular block of insulating material covered at its apex with a thin gold film and bearing onto the surface of a block of germanium, the gold film having been slit along the axis to form the emitter and collector electrodes. The device was called a 'transistor', a contraction of transfer resistor or possibly implying transit time in line with varistor or thermistor. The British used the term 'crystal valve' which was said to define 'a semiconductor device comprising one or more p-n junctions'.

Developments in the UK

The first British transistor was made in the laboratories of the Standard Telephones and Cables (STC) factory at Ilminster in Somerset. The first devices to be manufactured in any quantity were Types LS736 and LS737. Competition to commercialise the device was intense. Several designs were tried including a coaxial arrangement, with the two electrodes bearing on a central concave wafer, and a wedge arrangement with a tapered wafer fixed between two small plate electrodes. Eventually the single wafer having two whisker electrodes bearing upon it emerged as possibly the easiest and most robust to manufacture consistently.

Much effort was put into developing the germanium crystals and the whisker materials. However the crucial factor was the matter of electroforming the two electrodes, termed the emitter and the collector, to create the required n-type and p-type layers within the dice which was itself the base electrode. This was done by passing pulses of quite high currents through the electrodes, either whisker to whisker or individually from whisker to base. The collector in particular often required some hundreds of milliamps. The effect of the current was to inject impurities and to alter the crystal structure of the germanium.

T. R. Scott, at that time Managing Director of Standard Telecommunication Laboratories (STL), the main research laboratories of STC located in Enfield, Middlesex, describes in his book 'Transistors and Other Crystal Valves' (1955) the large amount of work that went on to develop a marketable product. In the USA the effort was arguably led by Western Electric. Both STC and Western Electric were primarily interested in electronic switching applications. At this time state-of-the-art devices were STC Type 3X/100N and 3X/101N , Western Electric Type 2A and RCA Types 2N32 and 2N33. 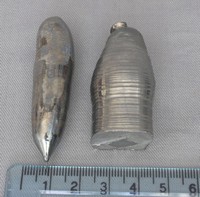 Note on the STC/Western Electric Relationship.

When the International Telephone and Telegraph Corporation (ITT) purchased the International Western Electric Company in 1925 much of the culture remained. The lettering of the new STC logo was in the 'flash' characters, many of the senior staff continued to serve and some numbering systems were to survive for decades. The agreement covered continuing exchange of patent and technical manufacturing information in telegraphy and telephony.

However, as the political situation developed in Europe in the early 1930s, STC as part of the multi-national ITT, which had large operations in Germany, was sometimes viewed with caution or even suspicion. STC and Western Electric drew apart and in some areas such as semiconductor manufacture became competitors. In 1952 they did however conclude an agreement in semiconductors and with the British Post Office and other manufacturers embarked on a project to design and build a model electronic exchange.

Illminster was an old rope works which STC took over in 1940 when it was necessary to move the valve manufacturing plant out of London, it was at North Woolwich, to the safety of the countryside. This plant made the high power valves so essential at the time. Thankfully it survived the war and went on making valves, thermistors and semiconductor devices until its closure in 1960.

More Semiconductors and Valves from the Museum of Technology